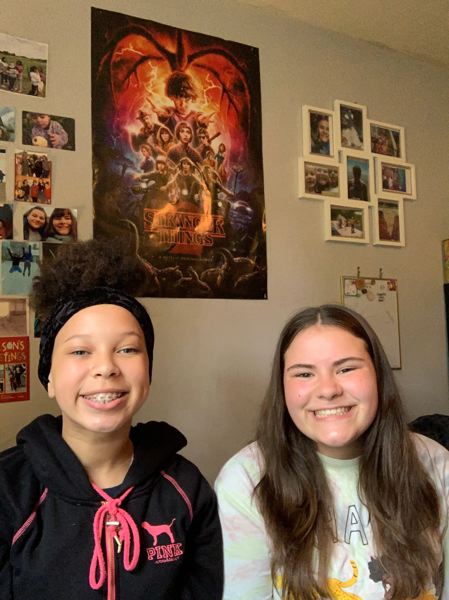 One of nonprofit REAP’s many in-school and after-school offerings for Portland-area kids who don’t have many advantages is the Young Entrepreneurs Program. It teaches business skills, including marketing and networking as much as bookkeeping and labor law.

Baby Shark Tank: REAP and the Art of the Deal

One of nonprofit REAP’s many in-school and after-school offerings for Portland-area kids who don’t have many advantages is the Young Entrepreneurs Program. It teaches business skills, including marketing and networking as much as bookkeeping and labor law.

Elaina Strong and Jaslin Sanders, two high schoolers in Southeast Portland, joined REAP’s YEP and decided their business would be selling their own art. They called their business Meadowfoam & Marigolds, because why not? They like flowers.

“They have helped fund our mission and have taught us all the skills needed to run a business,” said Sanders on a Zoom call with the Business Tribune in February.

Strong and Sanders’s mission is innocent: “To share the wonder of art with others. We want to allow everyone to share their voice and ideas through art,” they wrote.

Over the last four years, REAP has become a statewide model as it plugs another gap in the education model.

“There is not much talk about entrepreneurism in schools so they can actually be self-sufficient and own their economy,” REAP Executive Director Mark Jackson told the Business Tribune.

Jackson said it’s the difference in influence between people who sign the front of a check and the back of a check. “When you look at wealth creation, how our social institutions work, there are advantages to being a business owner.”

The goal is to find out what kids’ passions are and build businesses on them, to teach them business skills they might use when they are older.

The YEP program works with kids year-round, instead of the usual short summer camp. So, they have time to build a business. They learn what it takes to do a start-up, including mentoring and meeting with potential investors.

Jackson is also keen to divert kids from the mindset of spending any money they earn on an Xbox and putting it in a savings account instead. The latter is what more privileged kids often do, under the advice of their parents.

He says things like generational wealth are not common in the demographic REAP serves.

“They don’t see themselves behind the counter, they don’t look like them,” Jackson said.

REAP draws on professionals, too. Recently they had Travis Boersma, the CEO of Dutch Bros, online to tell his business journey story. “He talked about how to think outside the box. One of our board members said, ‘How do you connect with someone who’s never thought inside the box?'” said Jackson with a chuckle.

Ninth and 10th graders Elaina Strong and Jaslin Sanders joined the YEP program without an idea for a business. But since they both loved making art, they decided that would be their product.

“REAP helped us make the business and helped us progress. Our business has really been flourishing this year,” said Sanders.

Last summer, they had pop-up shops in their neighborhood, Brooklyn, Southeast Portland. They sold from a table in the street, like a lemonade stand but for art. In winter they primarily sell online.

Although they study record keeping, they are not sure how much art they have sold.

Sanders estimates sales at $300 in total since summer 2020. Prices are low, from $3.75 for a five- pack of stickers to $20 for an original painting and $5 for a small painting. A five-pack of pins is between $3 and $5. They recently started selling birthday cards, which is a constant market.

The first lesson they learned in REAP was from Charity Brown, a Business Consultant at NowAnswerGroup, in a webinar.

“She taught us how to add products online, on GoDaddy, which is where our website is,” said Strong. “Basically, how to market and how to put our products online and brand everything.”

They also learned about branding, especially making sure the words of the business name go well with the logo. They credit Tare Mutepfa, a YEP Program Development Manager, with that.

They found a marigold image on Google image and put it on an orange background.

“We wanted to have a really cool name that people would find interesting. Like when we tell them our business name ‘Meadowfoam and Marigolds, that’s cool!’ They’re just two types of flowers, and we just put the two together,” said Sanders

Over spring break 2019, the pair took the train to Seattle on a business retreat. “We tried to go to big companies to see how they got so big. We went to Microsoft too,”

At Microsoft, they went to a meeting where they learned about how startups go from garage to gargantuan.

One thing is simple — marketing is the platform for reaching other teens who might want their art.

“We’re mostly active on TikTok (under the name artbyjande) and Instagram and try to make videos daily,” said Strong. “TikTok’s algorithm is really weird, if we don’t post every day we don’t get on other people’s main page.” They are also on Pinterest. Videos of customers unboxing their purchases are an important part of the feedback loop.

Strong went to Silicon Valley in July 2019 and also had meetings at Airbnb and Google, and in Portland at Expensify.

“It was really cool,” she said. “I’d never been to California before and it was nice to bond with everybody in the team. And we stayed in nice hotels, it was so fun. I made a lot of memories there. And it was cool going to the big company and seeing how they operate as well.”

Asked what they could learn from big companies, they were impressed with the marketing budget. Mutepfa added that embracing the concept of mission is important for young entrepreneurs: having a vision and setting goals to reach it. And lots of market research. “How do they attract customers? How do they tell the story to customers? And what is that product or services that they are offering, that continue bringing customers?” he said. “In the program, we speak a lot about the hook story.”

Sanders continued, “Me and Elaine are just a small business. We started to like reaching out to more people on other platforms like Instagram and TikTok. We just reached out to somebody else who had like 700K on TikTok. And that helps us.”

“TikTok is a huge app right now, especially for teenagers that couldn’t possibly buy artwork. That’s kind of our target audiences, young people. Doing that, we got lots of followers and people like our art, and they comment on our page,” she said.

They do have a Limited Liability Company.

“If someone wants a big commission for lots of money, then we might need to get our own bank account,” said Sanders. “In the long run, me and Elaina are hoping to have art shops in Portland and all over the country. But that’s if we have like a huge business. We only have 300 followers on Twitter. So right now, we haven’t really worried about taxes and things like that. We still have two or three years left in high school.”

Mutepfa said they have discussed taxes and banking, but their next move would be getting an account co-signed with their parents.

Instead of giving them a survey with a suite of career occupations from which they try to identify with a particular job, REAP “unpacks the kid’s passion and desire, and from there we build out,” said Jackson. In the YEP program, 8th graders have been taking leadership roles over the new kids. Just as in real-world business, mentoring new entrepreneurs is important. REAP also has a directory of entrepreneurs.

If a kid says they want to be a video game tester — getting paid to play games — they suggest they try being a game designer.

“We’re teaching concepts that the Bill Gates and Phil Knights had to learn in the real world, and they’re learning it as young as 5th grade, and give them the confidence that their idea can be something real,” added Mutepfa.

He said the sort of businesses the kids have started have been things like nonprofits helping poor people, food businesses, art, hair, jewelry and clothing.

“We ask for their core talent. Most of our programming is focusing on what is it you’re excited about, what you’re really good at. And you can make money from that? How can we build around the idea?” said Jackson.

REAP is a year-round multicultural youth leadership program committed to empowering the next wave of leaders. REAP works with students in grades 3rd through 12th. Since 2001, REAP has been offering multifaceted programming designed to uplift resilient leaders who are empowered to achieve their dreams.

thank you for supporting our young leaders!

This website uses cookies to improve your experience while you navigate through the website. Out of these, the cookies that are categorized as necessary are stored on your browser as they are essential for the working of basic functionalities of the website. We also use third-party cookies that help us analyze and understand how you use this website. These cookies will be stored in your browser only with your consent. You also have the option to opt-out of these cookies. But opting out of some of these cookies may affect your browsing experience.
Necessary Always Enabled
Necessary cookies are absolutely essential for the website to function properly. This category only includes cookies that ensures basic functionalities and security features of the website. These cookies do not store any personal information.
Non-necessary
Any cookies that may not be particularly necessary for the website to function and is used specifically to collect user personal data via analytics, ads, other embedded contents are termed as non-necessary cookies. It is mandatory to procure user consent prior to running these cookies on your website.
SAVE & ACCEPT